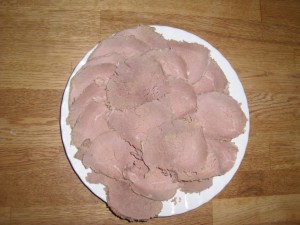 This is the first post from a guest author: Jason Ayres.

I have known Jason since I moved to Bicester, he has a local Karaoke & Disco Business and loves his food nearly as much as I do!

Earlier this year he asked me a question: “I like cold roast beef – such as you would buy sliced off a deli. However, no matter what I do I cannot achieve this effect with my left over roast. Whether I slice it after cooking, or keep as a joint, wrap up and slice the next day (as I would a ham), the effect is always the same. My gorgeous Sunday joint becomes dry and chewy, any sinewy bits not in evidence at Sunday lumch suddenly appear too. It’s absolutely useless for sandwiches. It’s impossible to slice to the thinness I require which may be part of the problem.”

As a result of my response Jason came up with this wonderful method (which I have yet to try, but he seems to produce on a regular basis judging by his FaceBook statuses…)

Over the years I have tended to cook my own joints of various meats and slice them as it is far healthier and cheaper than buying supermarket pre-packaged sliced meats. Buying loose from a deli is also very expensive.

Whilst having no problems with hams etc, the one meat that gave me headaches was beef. Although it is possible to cook a lovely moist Sunday roast, once you slice this up and put it in the fridge it goes dry and hard – completely unsuitable for sandwiches, and completely unlike what you would expect from a deli or pre-packaged.

Loathe to spend £2.49 on a flimsy 100g packet with 3 thin slices in, I began experimenting with other ways to cook the beef to create the desired effect. The following recipe is the result. I hope you enjoy.

The only specialist equipment you need for this is a slow cooker., which has a minimum (keep warm) setting.

Firstly, you need to choose a joint of meat. The first thing to note here is there is absolutely no point in purchasing expensive premium cuts from the butcher or supermarket “Finest” lines. The method I outline tenderises the meat so well you can use any cheap cut including brisket. Myself I prefer topside, so in this instance I have used a cheap Tesco Value joint (costing £3.77). See picture. You also want to try and get a joint with added basting fat if possible, as this will gently soak into the joint keeping it moist.

You also need to buy some bacofoil oven bags. As the joint is wrapped in one of these to keep in the juices.

Season the joint, place in the bag, with the air holes uppermost and place in the slow cooker. Don’t turn on yet.

The next thing to do is fill the kettle and boil it – then pour this into the slow cooker. You need to immerse the joint as far as possible – at least 90%. You might need to boil the kettle twice. Once in, put the lid on, and turn the cooker to its keep warm setting.

Over the next hour or two the water will gradually cool down, settling down to a point where it is still hot but you can dip a finger in without scalding it. The beef will cook gently in the bag, with the fat melting, but at a temperature where the juices won’t flow out of the joint.

How long you cook it is up to you. For a small joint such as the one pictured, 6 hours is enough to create a medium to well done finish. If you prefer it rarer, then 4 hours should suffice. I have cooked a larger joint for 10 hours and it has come out fairly well done but with still a hint of pink in the middle.

After you take it out leave the joint to cool for a while, then put it away, still wrapped in a container in the fridge until the next day. Then you can take it out. Unlike roasted joint, any fat around the outside should still be white as opposed to clear, thanks to the low temperatures of cooking. You can then slice it – I have my own slicer, which cuts lovely smooth thin slices but you can cut just as well with a knife.

You then have your finished product. You can keep this in the fridge for 3 to 4 days,  and it will stay as moist and as tender as when it was sliced. 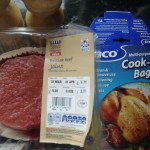 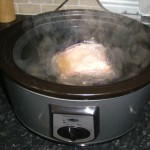 In the slow cooker 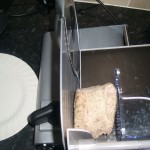