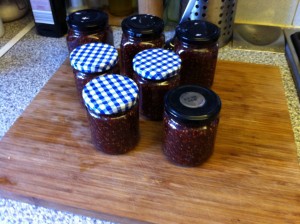 Friday is market day in Bicester and we are lucky enough to have two fruit and veg stalls in the market. During my normal Friday afternoon stroll down sheep street, I noticed that one of the stalls had fresh figs at 6 for £2 and the other stall had them at 5 for £2.

It was getting towards the end of the day so I went up to the more expensive of the two stalls and mentioned that they were cheaper at the other end of the market to which they replied “ours are bigger though!” I started to walk away and he asked if I wanted any – then I had a sudden thought “I bet they don’t want to take them home” so I asked how much for a tray. To cut a long story short, I got a full tray with six extras piled on top for £4.40 – over two kilos of fresh figs when I weighed them at home.

What to do with fresh figs I thought? So a quick trawl of the internet resulted in many different fig jam recipes – I decided that I could probably make my own recipe using several of my researched recipes as the basis.

Wash the figs, chop in to quarters and place in a preserving pan.  Add the sugar and half a cup of water. Chop the lemons in half, squeeze in to the pan then throw the squeezed lemon halves in too. Place the cinnamon stick and ginger in a piece of muslin, tie and add to the pan.

Over a gentle heat, ensure that the sugar is fully dissolved then bring to a boil and keep boiling for about an hour. Test for set, and when setting point has been reached remove from the heat.

If you prefer your jam to be smoother, use a hand held blender to chop up the larger bits of fig that are in the pan. Pack in to jars and seal. 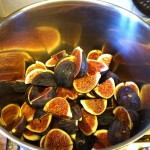 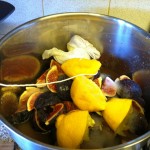 Fig jam ingredients in the pan 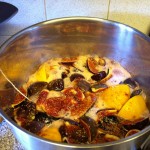 Fig jam on the boil