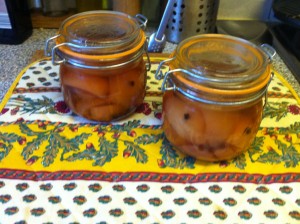 Last year my Uncle and Aunt offered me the pears left on their tree at the end of the summer. I made them in to spiced pickled pears which went down very well at christmas.

This year I was keen not to miss a trick, so I called my Aunt to make sure that I could get some of the pears to do the same with. Sadly due to the hot weather this summer (yes believe it or not it has been a hot summer…) the pears have ripened a month earlier than last year and I didn’t get as many. I have managed to fill two half litre preserving jars and they are now maturing ready for Boxing Day.

Pare the zest from the orange and put in a pan with the peppercorns, allspice berries, root ginger, orange juice, vinegar, cinnamon sticks and vinegar. Stir over a gentle heat until the sugar has dissolved.

Peel, quarter and core the pears, and stick a clove in to each piece of pear. Add the pears to the pickling mixture and simmer for 15 minutes until the pears have started to go ‘translucent.’

Remove the pears with a slotted spoon and pack in to jars.

Increase the heat under the pan and boil the mixture rapidly for 10-15 minutes until a syrup is formed. Pour the hot syrup over the pears and seal the jars. Leave in a cool place for at least a month before using.